How did modern atheism arise and come to have the role it does in Western society? What were the main historical events accompanying these developments? Who were the principal figures? What responses did Christianity make? Many of the criticisms of the established Church made by atheists were, in the speaker’s view, largely justified. Atheism initially arose principally for political and social reasons, rather than philosophical ones. The main aim of the series is to understand atheism’s various forms, rather than to make a Christian defence. But a survey of some current Christian responses and vision is also included.

This series was held at the Exchange, Dublin, in October and November 2015, and loosely follows the outlines of Prof Alister McGrath’s book ‘The Twilight of Atheism’, but includes much additional material. Views expressed, and any errors of fact, are the responsibility of the speaker. The talks were unscripted and were accompanied by visual presentations and other audio elements not presented here. Interaction with those attending is included on the recordings.

2. The Battle for the Mind: atheism’s high priests
Atheism’s project moves from rebellion against state and church structures to a battle for the mind, while in France Napoleon restores the Church; Germany (and England): Marx, religion an opium to dull resistance to injustice; Feuerbach: all gods as projections of human concerns; Austria: Freud: religion an infantile regression; the rise of liberal (Protestant) theology; the ‘ugly ditch’ between the historical Jesus and the ‘Christ of faith’; George Eliot and scepticism in Britain; Christian challenges to the foundational ideas of scepticism: C S Lewis, Dallas Willard, Alister McGrath, David Bentley Hart 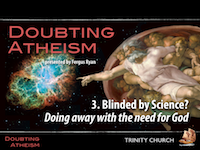 3. Blinded by Science?: doing away with the need for God
Science and faith: opposite views of reality? Founders of modern science believers in God: Copernicus, Galileo, Newton; Paley: God as ‘divine watchmaker’; Darwinian evolutionary theory and the ‘doing away with the God explanation’; creation and the age of the earth; Bishop Wilberforce and Thomas Huxley—the urban myth of the Oxford debate account; Richard Dawkins and the New Atheists; Christians at the cutting-edge of modern science.